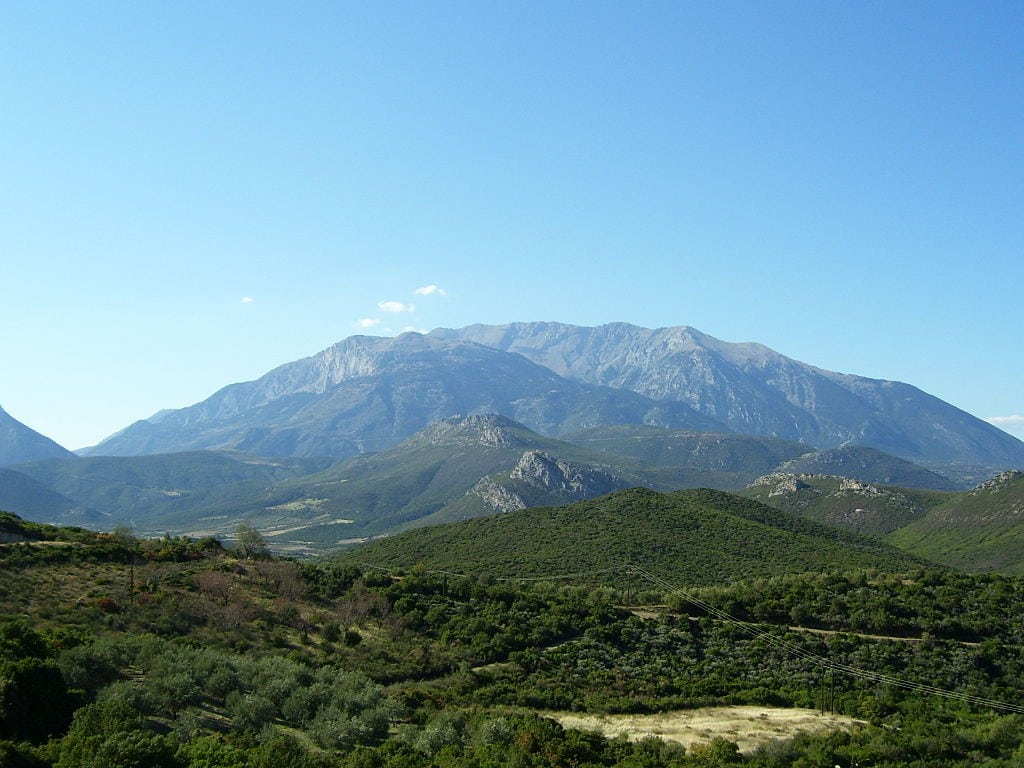 Delphi and Mount Parnassus (where 2016 seminar is happening)

One hundred miles northwest of Athens, soaring high above the Gulf of Corinth, stands the holy mountain called Parnassus. Nestled amidst the pine forested slopes and rocky crags of the sacred peak are the beautiful and exceptionally well-preserved ruins of Delphi. A city of wondrous artistic achievements and grand athletic spectacles during the flowering of Greek culture in the first millennium BC, Delphi is best known, however, as the supreme oracle site of the ancient Mediterranean world.

According to the earliest legends the site was originally a sacred place of the earth goddess Gaia (also called Ge) and was guarded by her daughter, the serpent Python. Later legends state that the site was the center of the world as determined by the god Zeus. Two eagles (or ravens) had been released by Zeus from opposite ends of the earth and following great flights across the skies they finally met at Delphi. A still later legend relates that Apollo, the son of Zeus, came from his home atop Mt. Olympus to Mt. Parnassus to slay the great serpent Python. Fleeing from the peak, Python sought safety in the sanctuary of the Earth Mother at Delphi. Apollo relentlessly pursued Python, however, and claimed the site. Later repenting of his crime, Apollo purified himself (on the island of Crete) and, returning to Delphi, persuaded Pan (the goat-god of wild places and evocative music) to reveal to him the art of prophecy. Upon the site of his battle, Apollo erected his own oracular temple (orienting its axis to align with midsummer sunrise and midwinter sunset) and, at the exact place where he had ‘speared’ the serpent, an omphalos stone was set in the ground.

This omphalos stone (meaning ‘center of the earth’ to the ancient Greeks) later became the center of the inner sanctum of the shrine of the Delphic oracle. The site was originally called Pytho, after the guardian serpent. It was renamed Delphi after the dolphin (delphis in Greek), whose form Apollo took in order to bring Cretan sailors to Delphi so that they might become priests in his new temple. Regarding the omphalos, one legend tells that the original stone, now lost, was a large meteorite fallen from the sky in deepest antiquity, while another legend says it was the first physical object to emerge on dry land after the waters of the Deluge had settled. The omphalos stone currently on display in the Delphi museum, while very old and indeed from Delphi, is thus not the original sacred stone. It is interesting to inspect this exhibited stone however, for its conical form and sculptural designs derive from the old pillar and tree worship of the prehistoric goddess cults.

Archaeologically (as contrasted to the mythological discussion above) we know but little about the early beginnings of Delphi. Excavations have revealed the site was a Mycenean village from 1500 to 1100 BC, during which time the primary religious emphasis was on an oracular cult of the Earth Goddess. Around 1000 BC the worship of Apollo became dominant when this new god was introduced by either the Dorians or other people from the northern region of Greece. The oracular use of the site continued during Apollo’s occupation and, through the endeavors of politically astute priests, Delphi achieved Panhellenic fame as a major oracle shrine by the 7th century BC.

Women, who were considered more sensitive than men to the oracular powers of the site, would first bathe in the waters of the nearby sacred Castalian spring (said to have been created when the winged-horse Pegasus struck the ground with his hoof, and to be favored by the Muses). Next they would drink from the sacred Kassotis spring, inhale the fumes of burning laurel leaves and finally, sitting in meditation near the omphalos stone, would enter into a visionary trance state. Many archaic accounts of Delphi relate that the oracular priestesses, known as Pythia, sat upon a tripod-legged chair situated over a fissure in the earth from which emanated trance-inducing vapors. Plutarch (46 – 120 AD), a Greek philosopher who served as a priest at Delphi, and Strabo (64 BC – 25AD), an ancient geographer, each told of vaporous fumes, known as pneuma, which caused the visionary trance states. Plutarch also commented that the vapors had a sweet smell and that the oracular priestesses, after inhaling them, often behaved like runners after a race or dancers after ecstatic dancing. A traveler in the generation after Plutarch noted that the Kassotis spring, on the slope above the temple, disappeared underground and then emerged again in the adyton, this being the room inside the temple of Apollo where the oracular priestesses sat. It is interesting to note that the word pneuma, meaning gas, vapor and breath, gave rise to the English words pneumonia and pneumatic. It is also believed by some, to be the same phenomenon that is referred to as Qi, Chi, Prana, etc. in other cultures.

Questions regarding the future would be asked of the oracular priestesses. The answers, interpreted by male priests and then spoken in verse, proved so accurate that the Delphic oracle came to exercise enormous political and social influence in the Greek empire for nearly a thousand years. Historical sources indicate that the Delphic oracle was open only one day per month during the nine months of the year when Apollo was considered to be resident at the site. For a variety of reasons the Delphic oracle was in decline by the 1st century AD and the last recorded oracle was in 362 AD. The Christian emperor Theodosius officially closed the vast temple in 393 AD, thereby signaling the end of the ancient tradition of Greek oracles and the ascendancy of the new god of Christianity. Delphi was abandoned to the elements and gradually fell into ruins.

Peering through the veils of legend and myth we may discern at Delphi the story of an ancient goddess site being later taken over by a culture whose primary deity was a male god. The ‘spearing’ of the serpent may be interpreted as the marking of the energy beam point (a small area of concentrated energy at a power place) with a spear of stone and also the symbol of the masculine usurpation of a feminine deity shrine. The omphalos stone, and the earlier marker stone it replaced, were used to gather, concentrate and emanate the energies of the power place for the benefit of the local people. From earliest times the particular energy of the site, as well as the vapors rising from deep within the earth, had been recognized to induce prophetic visions in people and as a consequence a quasi-religious cult had developed over time.

The Tholos temple at the Sanctuary of Athena Pronaia, with the sacred Mt. Parnassus is located roughly one-half mile from the main concentration of buildings at Delphi. Athena Pronaia was the gateway to Delphi. The site, having been occupied since the Neolithic Period (5000-3000 BC) and later by the Myceneans, may actually predate Delphi as a sacred place. Originally dedicated to the worship of an Earth Goddess, the shrine was eventually occupied by Olympian deities, Athena in particular. A guardian of wisdom and spiritual consciousness, Athena continued the ancient veneration of the feminine principle and brought devotion to the Earth Mother into the Classical Age of Greece. The Tholos temple, built in the early 4th century BC, has an unusual circular shape. This shape and the leaf-adorned capitals of its Corinthian columns are representations of the sacred forest groves of the old Earth Goddess religion. Writing in The Earth, The Temple, and The Gods, Vincent Skully comments that

“The omphalos, or navel, which was supposed to mark the center of the world, was kept in the sanctuary of Apollo’s temple itself (in the center of nearby Delphi), but the Tholos of Athena’s sanctuary more clearly seems to evoke the navel of the earth than does any other building there.”

Mt. Parnassus, in addition to its other mythological associations, holds a similar position in Greek legends as Mt. Ararat holds in the Old Testament. After the waters of a great flood receded, an ark-like boat carrying Deucalion and his wife Pyrrha landed on Mt. Parnassus. High upon the mountain, Deucalion sought advice from Themis, a resident earth goddess, regarding how to repopulate the earth with humans. Themis instructed Deucalion and Pyrrha to throw rocks over their shoulder, these being the “bones” of the Earth Mother, and that the stones would be transformed into the first human beings. Themis (who was another daughter of Gaia, by Uranus) also figures in an alternate legend of the Delphic oracle. In this account, Themis succeeded Gaia as the guardian of sacred Mt. Parnassus and later instructed Apollo in the arts of prophecy. In these myths, Apollo does not kill the serpent Python, but rather an evil dragoness known as Delphyne. Python then becomes the guardian of Apollo’s oracular temple, while Themis continues to reside upon Mt. Parnassus. Mt. Parnassus is also the legendary home of the Muses (three or nine in number according to different legends), these being divine singers and musicians whose music enchanted the gods. The association of the Muses with the mountain has made it a source of poetic inspiration and the favored pilgrimage destination of poets.