In the end I was happy to wake up but I felt sick of that dreaming experience so I skipped the breakfast. Later I felt much more free and easy and the morning meditation was better and longer. 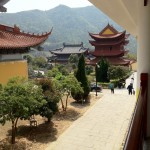 Today is Saturday and the temple is receiving its weekend visitors as usual, especially because the day is a holliday in the lunar calendar followed by Chinese.

On the afternoon is scheduled our first practice into the cave. We have been told how to practice, by hearing and feeling the mountain breath, then synchronize our breath with the mountain breath. This practice will result in the ability to see outside of the mountain, through the rock, but perhaps after some time of perseverent exercise. Many conditions must be met however reaching this ability it is not so impossible as it sounds.

After reaching the cave we sat for a while to cool down, close the pores and forbid the yin qi from the cave to affect our health. Then we entered the cave and stopped to a large place able to fit much more meditators. Like all cave I seen in China, and like all mountains I seen, where some tourism activity is done, all path are covered in rock and the cave is well illuminated. Also the places for meditation are plane, made by concrete. This does not disturb the natural look of the cave, only makes it more organized and clean. 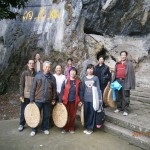 The cave has three main parts, the central one is for penance, where people meditate to get their sins forgiven (most important by their own shen). Meditation is usually done by facing the wall and thinking about yourself. On the upper part there is a cascade and that place is usually used for some kind of washing and cleansing meditation. Then on the smallest part of the cave, situated on th eopposite site, where only one or two persons can fit, the dan cultivation is practiced, and the immortal fetus is produced.

The evening practice introduced the fifth form of ping heng gong, where the yin and yang energies get balanced. A bit more complicated but not very much.