Longmen branch is a fraction of the powerful Taoist school of Complete Reality, which has integrated Taoism, Buddhism and Confucianism in a new form of Taoism. Complete Reality Taoism has eventually extended in all of Medieval China, and continues its activity at the present moment. In the last 10 years numerous classical texts and works belonging to this school were translated to English language . 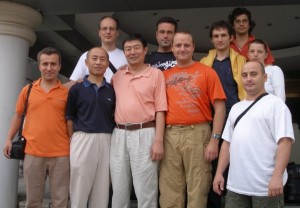 Taoist fraction of Dragon Gate, of which successor is Taoist grandmaster Wang Liping, started as a weed of the Northern tradition of the Complete Reality school. Its founder in the 13th century was master Chang-chun, which was one of the most bright students of Wang Chongyang .

Chang-chun, the Master of Eternal Spring, was one of the wise men that advised Genghis Khan to keep the old civilization of China after the conquering by the Mongols, eight hundred years ago. Genghis Khan named Chang-chun supervisor of religions in China, thus the Dragon Gate fraction playing an essential role in preserving the Chinese culture.

Longmen.eu is the European portal of Longmen taoists oriented to promote the cultural values of Taoism in general and of Complete Reality school in particular in all European countries.

No trackback or pingback available for this article